At TSM we have 4 Houses that children are placed in when they arrive. These Houses are named after St Patrick, St David, St George and St Andrew.

Every child in these Houses has to wear a tie or PE shirt in their House colour. Children who display good behaviour, work, respect or any of our school values are awarded House Points which are added up every half term. The winning House at the end of each term receives an own clothes day to celebrate. The House with the most own clothes days, wins a party at the end of the year.

During sports day we wear our House colours and compete against the other Houses to earn the Sports Day trophy.

Have a look at the Saints of each House and who the Captain and Vice-Captain are: 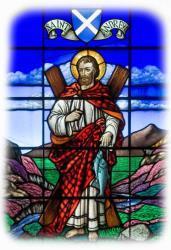 Saint Andrew's birth date and place of birth are unknown. During his lifetime, he became a disciple of John the Baptist, one of the Twelve Apostles, and the first of Christ’s disciples. Saint Andrew and his brother Peter are recorded in the New Testament as having been declared “fishers of men” by Jesus after he asked them to cast their nets. Saint Andrew was crucified circa 70 in Patras, Achaia, Greece. 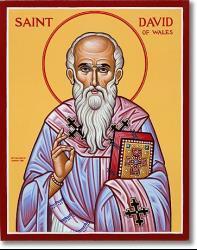 St. David is the patron saint of Wales, the one nation in Britain to become Christian in Roman times and to remain so even afterwards. He was a Welsh priest, who in the middle of the sixth century made an effort to unite the Welsh churches. Though most of his life story is shrouded in mystery, we do know that he presided over an important meeting of church leaders, when it is thought he himself was archbishop of the southern part of Wales. He is said to have moved his seat of church government to what is now the little city of St. David’s, in Pembrokeshire. Clearly he brought a sense of unity and purpose to Christians in Wales in the troubled years that followed the departure of the Roman forces from Britain. David was made a saint in 1120. 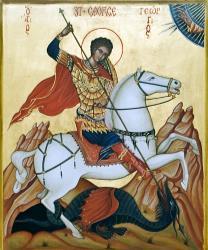 St. George was born in 280AD in Cappadocia, an area that is now part of Turkey. Emperor Diocletian executed St. George in April 23, 303, in Lydda (modern-day Lod), Palestine, for protesting Diocletian’s persecution of Christians. Circa 322, George was written about by Eusebius of Caesarea. He was made known to England by Arculphus and Adamnan in the early 700s. He was made patron saint of England in 1098, after appearing to soldiers at the Battle of Antioch. 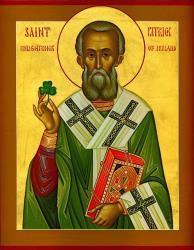 St. Patrick is Ireland's patron saint, known for spreading Christianity throughout the country as a missionary during the 5th century. Born somewhere in Britain arguably in the late 4th century A.D., the man who would come to be known as St. Patrick was captured by pirates as a child and brought to Ireland.

During his enslavement, he was called to Christianity and escaped his captors after six years. He returned to Ireland as a missionary, and in his teachings combined Irish pagan beliefs with Christian sacrament. He is annually honoured on his feast day, March 17.